Bilingual English-Spanish blog on issues important to the professional interpreter. 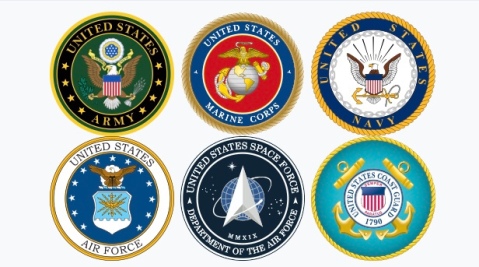 On Memorial Day, the flag is raised briskly to the top of the staff and then solemnly lowered to the half-staff position, where it remains only until noon.  It is then raised to full-staff for the remainder of the day. The half-staff position remembers the more than one million men and women who gave their lives in service of their country. At noon, their memory is raised by the living, who resolve not to let their sacrifice be in vain, but to rise up in their stead and continue the fight for liberty and justice for all.

The United States Army is the largest branch of the armed forces and performs land-based military operations. With the other four branches of the armed forces, plus the Public Health Service Commissioned Corps, and the National Oceanic and Atmospheric Administration Commissioned Officer Corps, is one of the seven uniformed services of the United States.

The United States Marine Corps is a branch of the armed forces responsible for providing power projection using the mobility of the Navy, to deliver rapidly, combined-arms task forces on land, at sea, and in the air.

The United States Navy is the naval warfare service branch of the American armed forces. It is the largest Navy in the world, with the world’s largest aircraft carrier fleet.

The United States Air Force is the aerial warfare service branch of the armed forces, and it is the largest and most technologically-advanced air force in the world.

The United States Coast Guard is a maritime, military, multi-mission service unique among the U.S. military branches for having a maritime law enforcement mission (with jurisdiction in both domestic and international waters) and a federal regulatory agency mission as part of its mission set. It operates under the U.S. Department of Homeland Security during peacetime, and can be transferred to the U.S. Department of the Navy by the president of the United States at any time, or by the U.S. Congress during times of war.

The United States Space Force is the space warfare service branch of the U.S. Armed Forces, the sixth and youngest branch, and the first one established since the formation of the independent U.S. Air Force in 1947.

To complete this brief description of the United States armed forces, I would like to explain the Joint Chiefs of Staff.

I hope you find this information useful and I hope that it may come in handy when interpreting national defense or military issues involving the United States. I now invite you to add any additional information you may consider useful and relevant to our practice as professional interpreters.

§ 4 Responses to The U.S. Armed Forces and Memorial Day.

This site uses Akismet to reduce spam. Learn how your comment data is processed.

You are currently reading The U.S. Armed Forces and Memorial Day. at The Professional Interpreter.